Here we’ll profile the scatter code to identify the sections of the code where most the execution time is spent.

We’ll use the code in directory original. Start with the command

The cProfile profiler is one implementation of the Python profiling interface. It measures the time spent within functions and the number of calls made to them.

Note: The timing information should not be taken as absolute values, since the profiling itself could possibly extend the run time in some cases.

Run the following command to profile the code:

in your Slurm script or when running interactively. Additional arguments can be passed to the scatter.py at the end if needed.

Notice the two options in the above command.

If you leave out these options the code will just run normally.

A nice way to visualise the output.pstats file is with gprof2dot.

Visualising the profiling output with gprof2dot

On Maui, generate an EPS image

as you would otherwise get message Format: "png" not recognized.

Now view output.png with the command display output.png on Mahuika (or display output.eps on Maui) if you have enabled X11-forwarding in your ssh command. Alternatively, you can copy the file your local machine and open it there. 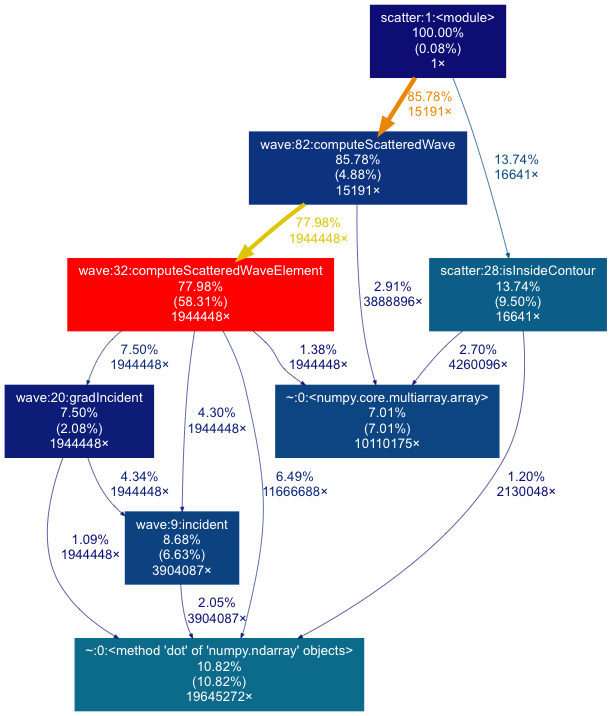 What the image shows:

What to look for:

The cProfile tool only times function calls. This is a good first step to find hotspots in your code (and often this is enough by itself). However, in some cases knowing that a particular function takes a lot of time is not particularly helpful. For example, it could be a very long function with multiple loops and computations.

line_profiler is a python profiler for doing line-by-line profiling. Typically, you would use line_profiler to gather more information about functions that cProfile has identified as hotspots. To use it, you modify the source code of your python file slightly to specify which functions are to be profiled. line_profiler will time the execution of individual lines within these designated functions.

Note: line_profiler is installed in the Python module we loaded earlier. You can check that it is installed by running kernprof --help, which should print help information for the kernprof (line_profiler) program that we are going to use. (If not then pip install line_profiler.)

To demonstrate the use of line_profiler we will use it to profile the isInsideContour function in the file scatter.py.

Note: we choose this function because it is short, which means we can include the output here and explain it.

Detailed documentation about line_profiler can be found here.

You should see something like this after line_profiler has run:

There is another useful Python profiling tool called memory_profiler, which can monitor memory consumption in a Python script on a line-by-line basis. The memory profiler tool is used in a similar way to the line_profiler tool we already covered, i.e. you have to use the @profile decorator to explicitly tell memory_profiler which functions you wish to profile.

We will not cover memory profiler in detail here but more information can be found at the page linked above.

« Introduction to profiling Profiling an MPI program with MAP »