We’ll use the code in directory vect. Start with

Vectorisation in Python is a programming style where operations on a single piece of data, typically in a loop, are replaced by operations on entire arrays. Vectorisation can improve the performance of a code and can make the code more concise and easier to maintain.

In scripting languages, loops can be slow to execute because of the overhead of the interpreter, which may need to parse each expression, perform various input data checks and more. These overheads add up when expressions are repeated many times in a loop. Vectorisation avoids the issue by replacing the loop with a single array operation. This can significantly boost performance if the array operation is implemented in a compiled language such as C.

Start by looking for loops in your code. The more iterations the better.

Good candidates are loops where the same function is applied to each element. Reduction operations (for example sum or product of all array elements) are also good candidates.

Use numpy for fast array operations

Array operations are available through the numpy Python module. numpy arrays behave in many respects like lists with the following restrictions:

On the other hand, numpy supports elementwise and reduction operations on arrays.

Use numpy arrays in place of lists if you don’t need the flexibility of lists. Vectorised Python code using large numpy arrays typically runs much faster than plain Python code with loops - often as fast as compiled code.

If your algorithm has high “algorithmic intensity”, where many operations are done on the same piece of data, you may find that implementing loops with numba or ctypes can give yet better performance. These methods may use fast processor caches more efficiently, avoiding the cost of repeatedly fetching data from memory. They may also avoid temporary arrays that numpy sometimes creates.

can be rewritten as

The vectorised code is not only faster but also more concise.

We have written a partially vectorised version of scatter under the vect directory.

How much does vectorisation improve performance?

The plot below the speedup of the vectorised version of scatter.py compared to the version in the original directory: 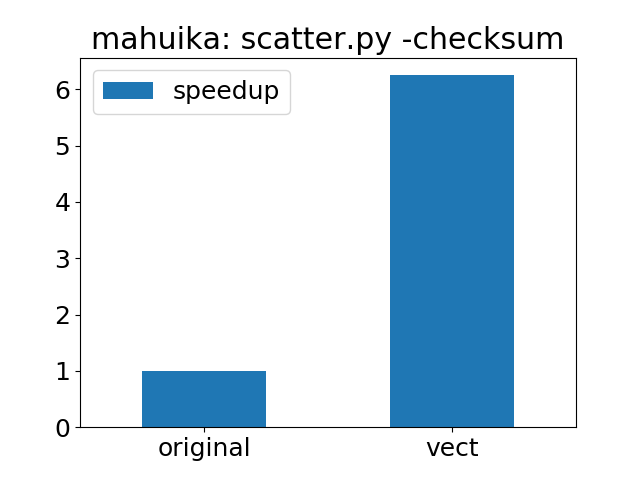